Is this the highest minimum? | The Canadian coach 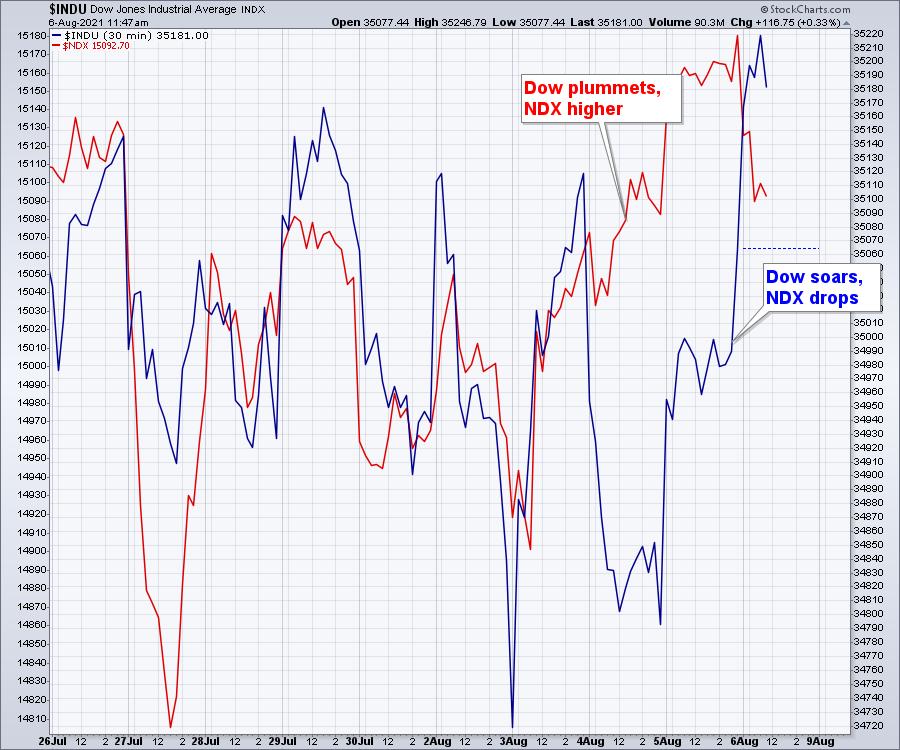 The market has really been a two-tape story this week.

On Wednesday, the Dow Jones Industrial Average fell 290 points, while the Nasdaq continued to rise. By the end of Thursday, the Nasdaq was pausing and the Dow was climbing. Following Friday morning’s job report, the Dow shot up and the Nasdaq fell just under 1%.

What makes this more than a casual observation is that the performance chart also changes behavior over the course of the week.

In the green box (Friday / Monday), yields rose as the Dow fell. Yields then fell inside the box as the Dow began to rise, which meant a change. They tried to get back in sync, but on the black arrows, the two quickly diverged again. When we close the week, they seem to be back in sync.

However, something else changed this week as the big trend in yields seems to change.

As we enlarge the image, we will add the Industrial line again.

The Dow has been circling in June, while performance in red remained relatively stable. As July progressed, they became more synchronized, especially in recent weeks. The blue Dow stabilized sideways over the past three weeks, while performance was building a base.

As yields corrected, the Dow line consolidated sideways. In this final chart, which is extended to a daily chart, we can see that both exceed the maximums at the close (end of the day) to close the week. If yields start to rise, is it time to return to value trading? Technology stocks have been especially strong since May, when the Dow and yields began to diverge. This would include banking, energy and industrial. I will monitor the performance of these groups to see if this is the start of the next rotation.

It’s never easy to spot a rotation as it’s happening, but if the yields mark a bottom here, I want to be spinning with the trade. The retrospective is 20/20, as they say. Profits move where the market is going, not where it has been.

About the author:
Greg Schnell, CMT, is a senior technical analyst at StockCharts.com specializing in intermarket analysis and commodities. He is also a co-author of Stock charts for mannequins (Wiley, 2018). Calgary-based Greg is a board member of the Canadian Society of Technical Analysts (CSTA) and president of the Calgary CSTA chapter. He is an active member of the CMT Association and the International Federation of Technical Analysts (IFTA). Learn more

Subscribe to The Canadian coach to receive notifications when a new post is added to this blog.