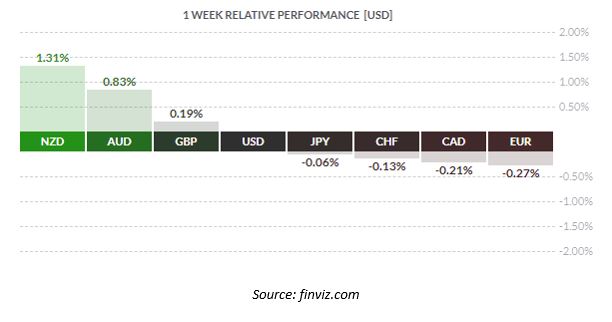 Hello and welcome to next week’s Key To Markets preview.

If you have any questions about this information, please contact your KTM Account Manager who will be happy to help.

In case you missed it …

HOOD goes crazy! Robinhood shares had a natural debut in the form of a meme in public markets. It first fell 10% and then rose to 100% in large options volumes.

Swiss shelter flows: The Swiss franc wiped out the entire 2021 loss against the euro, with EUR / CHF now testing below strong support at 1,075.

Yen drop n ‘pop: The USD / JPY fell sharply below 109, to a low since the end of May, but then reversed 100 pips north in a few hours (bullish candles that sank the daily chart).

Gross resistance: The price of oil has been sidelined for a month after hitting resistance from the peaks of late 2018 and early 2019.

Amazing RBA surprise: The Australian central bank went ahead with the reduction of its bond-buying program despite damaging economic blockages across the country.

Conical speaking BOE: The MPC judged that “the conditions have been met” to talk about the reduction in volume. They also outlined how they planned to combine the interest rate cut.

Ethereum London Fork: Ether gained ground in anticipation of the major update to the Ethereum network on Thursday last week.

Cryptographic regulation: SEC President Gensler says he is “technologically neutral” but not neutral about the need for greater protection for cryptocurrency investors.

“Opi” game: Chinese state media labeled the opium online game and compared it to a drug, causing Tencent and NetEase shares to plummet for fear of further state intervention.

Graph of the week

The 50-day moving average has been the perfect place for year-round dive shopping for the S&P 500, PER the gains after each touch have been less and less. The indicator at the bottom of the bar graph shows the performance since the 50 DMA was touched.

Highlights of the economic calendar

5 things to see this week

The largest of all major currency pairs has just formed a bearish cross of death. That’s where the 50-day moving average crosses below the 200-day moving average. The idea behind signal identification that the short-term trend will cause the long-term trend to go down. Of course, it doesn’t always work and very often a counter-signal rally is obtained right after. However, because it is so well known, the sign can be a prophecy that is fulfilled.

The Swiss franc and the Japanese yen have been the best exchange rates in recent months, as these currencies are often preferred in times of uncertainty as an active refuge. Some U.S. economic data was a bit soft and fears about the Delta covid variant grew, which contributed to the unrest. The continued strength of these currency pairs could be a warning of a broader sense of risk in all markets, which is very relevant when US stock indexes are near record highs.

We have asked the question before and the answer was no. How about now? Things have changed since then: OPEC + finally agreed to production cuts starting this month, U.S. crude inventories have begun to rise, while travel warnings to China and warnings of possible closure orders arriving in some U.S. states have weighed on demand prospects. Both WTI crude and Brent crude have had multi-year resistance since the 2018/19 peaks and have gone sideways, as in what appears to be more of a continuation pattern than an investment so far.

In the absence of major central banks: this week’s macro focus will return to inflation. US consumer prices soared to 5.5% year-on-year in June. The causes of the highest inflation in the year since it was blocked are already well documented: supply chain bottlenecks, and so on. A high CPI is pushing the Fed’s reduction schedule forward and that should be positive in dollars.

By the end of this week, more than 90% of the S&P 500 will have reported second-quarter results, so the earnings season is as good as it has been. It was probably one of the strongest earnings growth quarters that will ever be seen given the annual comparisons during a recession and all the stimuli that have helped accelerate the recovery. This may be a volatile time in the market, because now investors have a broader view of how the profit season has gone and what their reaction has been so far.

Here you can find analysis of the main asset classes, including the major currency pairs, gold, oil and the S&P 500. (SEND REQUESTS IF YOU WANT MORE ANALYSIS)

The EUR / USD has made little progress since rising last week. Now, the best opportunities seem to lie in another decline to lows at 1,175 or sell strong near the June 23-25 ​​peaks.

GBP / USD withdrew the form below 1.40, as we suspected, but found support at 1,387. A further decline to 1.38 offers a better value shopping area.

USD / JPY produced a large bullish candlestick that provides a short-term bullish signal. A drop to 109 could be a buying opportunity, while 110.5 remains a possible sell-off to resistance.

AUD / USD is in a rising channel that could be part of a larger bearish flag pattern, where the top of the channel offers selling opportunities, as well as a break below the bottom channel line.

XAU / USD follows the aforementioned side pattern last week, trading in a box between 1790 and 1830. The box is almost too well defined to expect a clean outbreak.

BRENT has become agitated, but it seems possible to lower the term to close to 70, with sales opportunities at 72.50 and 74.

US500 trades in a narrow box below record highs. As we’ve seen, setbacks to the 50 DMAs have worked this year, but they may not continue to do so.

Thank you so much for reading and have a great week negotiating.

Before making investment decisions, you should know that:

– Key to Markets publishes analysis of any kind solely for informational purposes and this analysis should not be construed as investment advice or as a request to buy or sell any financial instrument, including unrestricted CFDs.

– Key to Markets will not be liable for any loss or damage that may result, directly or indirectly, from the use or reliance on the data provided by Key to Markets.

– While every reasonable effort is made to ensure that all content sources are reliable and that all information is presented, to the extent possible, in an understandable, timely, accurate and complete manner, Key to Markets does not warrant the accuracy or integrity of any information contained in the analysis.

– Past performance is not a guarantee of future results.